macOS Catalina – What You Need to Know

Apple released the next version of its Mac operating system, called Catalina, last week. It has features and enhanced security many will want. Even though it’ll be free, should you upgrade? Maybe! Maybe not!

Some Features & Improvement
Apple is proud of its OS (operating system) improvements with this version of macOS. It looks very promising!

I’m especially excited about how Sidecar may improve my work when traveling on planes!

Why the Cautionary Tone, Nick?
One of Catalina’s new features is that it will only run 64-bit apps. Though the macOS has been a 64-bit OS for some time, this will be the first version that will only allow running 64-bit apps. It’s a good and important step forward, but it could mean that some of the apps you’ve come to love and rely on will not work on a Mac running Catalina.

What Should You Do Before Upgrading?
Because 32-bit apps will not work on Macs running Catalina and going forward, it’s important that you find out which of your apps will be affected, and then upgrade those to 64-bit versions. Here’s how:

The apps that are not 64-bit are the ones that will not work on a Mac with the Catalina macOS. 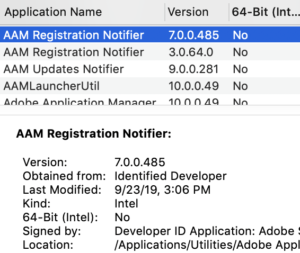 You’re only other option, at this time, may be to not upgrade to Catalina. And that’s not necessarily an unacceptable option at this time. The decision is yours. The main thing is to know in advance so you don’t get caught by surprise.

Because my role as an IT engineer requires early analysis for our clients, I migrated to it right away. Here’s what happened and what I learned.

My Mac was Bricked
Bricked is a term of endearment in the IT world for a device that has become as digitally relevant and useful as a brick you’d lay in your driveway. That may be a bit extreme… it would power up. But it was so buggy, and it locked up so often that I couldn’t get hardly anything done without having to manually crash it and try again.

After a few days of working with Apple engineers and testing fixes, I decided that being productive was more important than being helpful to Apple. Even though there were no guarantees, it was time to completely erase everything on my MacBook Pro and start over. My data and most of my settings were backed up, so the only risk was that I’d lose a few hours restoring the device back to usefulness.

Happiness Restored!
To erase the drive completely, I had to boot into recovery mode and start the Disk Utility there. Erasing the entire drive was then an option, and the OS (Operating System) downloaded via WiFi and reinstalled– fresh.

Then I reinstalled all of my apps (they were all 64-bit, so no worries there), and re-synced my data. Going through app configurations was the next step, and WaLa! A useful Mac running Catalina that works predictably!