There’s a lot of buzz these days about Macs, and many in ministry are asking for them.  Historically this decision has been driven by the software / applications in use.  PC-centric churches usually say, “No.” to Mac requests pretty quickly.  But Macs can run PC software now, so the question is going to keep coming.  We need an updated response, and this article may help.

What’s the problem?
Apple recently began selling Macs that use the same Intel processors PCs use.  Before that happened, PC software couldn’t run well on a Mac.  While there were ways to access PC software from a Mac, the experience was usually a bad one, and few pursued the option strongly.  Since the decision for hardware is best made based on the software in use, the PC vs Mac issue had been relatively easy.  Now, though, we’re having to re-examine the PC vs Mac decision.

I am re-examining this issue from two perspectives:

There are many paths, Grasshopper…
There are at least five ways to run PC software on a Mac:

In my initial research I found many complaining about all of these possibilities except for Parallels and Fusion.  Many IT professionals are working with VMware’s virtual server products, and our firm has had great success with them.  So I decided to do my testing using their Fusion product to create a virtual PC on the Mac.  The Mac I used for testing was a MacBook Pro running Mac OS X 10.4.11 (Tiger) with a 2.4ghz Intel Core 2 Duo processor, 4gb RAM, 160gb hard drive, and 17-inch monitor.

How’d it go?
The software installation was surprisingly easy, and setup was too.  VMware’s Fusion uses the same approach on the Mac as it does in its server software.  You create a virtual PC following easy prompts asking how large the hard drive should be, how much RAM it should have, etc.  They give you suggestions along with minimum and maximum ranges.  I set up a virtual PC having one processor, 1gb of RAM, and a 60gb hard drive.  It then asked me to insert my Windows installation disk, and from there on it was like setting up any other Windows PC. 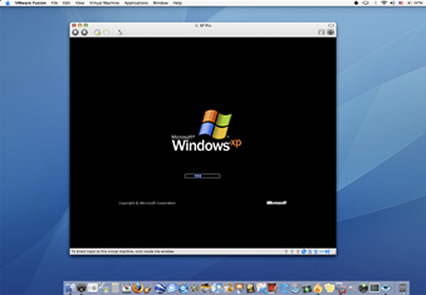 PC-on-a-Mac Fusion Observations
The first thing I noticed was how fast the PC ran!  That makes sense, of course, when you consider that it’s virtual and all running in the Mac’s RAM.  Then I decided to try Fusion’s ‘Unity’ mode.  It took my PC applications and allowed them to run as normal floating ‘windows’ on the Mac desktop!  So my PC applications looked very similar to my Mac applications!

There are some nice features on the Mac.  The monitor is much nicer than my PC monitors (desktop and notebook).  And the speakers are terrific!  But one thing surprised me:  the Mac’s keyboard illuminates in low light— VERY nice!  This makes using the Mac in low light enjoyable and easy… something I’ve always felt was missing from my PC notebooks.

Fusion also gave me the option of setting up the ability to share folders between the two desktops!

A Couple of Frustrations
The Mac keyboard is missing keys!  Like the Insert and Print Screen keys!  And the Delete key acts like a Backspace key!  It took some research, but I found the following keystrokes for PC users working on a Mac:

The Mac uses a one-button mouse.  I discovered that right-click functionality is available using the Mac’s mouse while pressing the Ctrl key.  I also found that you can plug a two-button mouse into the Mac and get all of the functionality available in the PC.  And that functionality works in Mac programs too!

And though there’s no Command Prompt function, there is a similar Mac function called Terminal which opens a window you can run Unix commands in.

I also found that I couldn’t extend any PC programs across multiple monitors… they all must run in a single monitor.  VMware assures me that functionality is coming in an update.

Good News!
I could run all of the PC programs I normally run on a PC very nicely using VMware’s Fusion! That includes MS Office 2007 (including Outlook and Visio), SQL databases, Bible study software (Libronix), and utilities I use to setup Microsoft networks.  I also setup virtual Linux and Windows Vista computers and had success in each.  This technology works, and is ready to help us as we focus on building The Kingdom.

Okay, PC apps run well on a Mac… but are they worth it?

The Mac Reputation
Macs are thought to be systems that run creative software better (music, graphics, and video editing) and that give users a better ‘personal’ experience.  This might be true, depending on the kind of user one is. Basic

Mac OS Apps
The Mac OS (operating system) comes with bundled software, like Windows does, to help users manage creative files.  These are sometimes referred to as applets because they’re simple applications when compared to their commercial counterparts.  (An example would be comparing Microsoft’s Paint with Adobe’s Illustrator.)  If one will only be using the bundled applications, there’s no doubt those provided with the Mac OS are better.

Editing pictures, video, and sound are all similarly better in Mac applets.

Full Applications
Full featured applications for these tasks can usually be bought to run on either the Mac or PC.  In those cases, the software is pretty close to the same in capability, with two exceptions:

Mac Cost
Macs cost more than Windows PCs.  Mac users may argue that, but there’s really no argument.  My high-end MacBook Pro cost easily double what I would have spent for a similarly equipped PC.  It was worth it because supporting Macs is part of our business model, but I would otherwise have a hard time justifying the cost difference.

Mac Support Issues
I work in both OSs constantly, and I have been disappointed with the Mac OS (Leopard).  I’ve had to completely rebuild it from the ground up twice in the last month!  Honestly, that hasn’t happened to me in a Windows OS for many years.  Both were
caused by weaknesses in the OS that allowed it to corrupt itself:

The Mac Mystique
Macs have an undeniable mystique about them, and it’s causing many on our teams to request them.  We can make them work with PCs on the same network, and even run PC applications on them very well.

But few on church and ministry IT staffs can support them, relegating their support to the Mac user.  The problems are:

What’s the Bottom Line?
Requests for Macs will keep coming, and they can work in your environment.  They definitely cost more, but saying, “No.” just got harder.

If you’ve got the budget, it’s okay to say, “Yes.”  Make sure you have a team ready to help with the initial setup and ongoing support of your Macs, and you’ll be okay.